I wanted to learn about common resistors used as HEATING ELEMENTS in electrical circuit in order to achieve optimal working temperature in anti-mosquito tablets (mats) heating device. Additionally, this simple device can be used as a PowerBank USB discharger.

Yes, I’m aware of the fact that you can purchase factory-built units for like $1-$2, but where’s the fun in that? :)

* I used two 8.2 Ohms, but ideally we should use three 12 Ohms resistors both for larger mats/pads cover surface and 85~90° C target temperature

Human skin tolerates temperatures below 43 °C (109 °F) (source: Wikipedia). Anything above that is perceived as burning hot and dangerous!

Five watts of power maybe doesn’t sound much, but when generated/released in a small resistor body like this, its surface can get very hot – near or above 150 °C (302 °F).

DO NOT TOUCH resistors while circuit is POWERED ON !!!

Common 5 watts cement/sealed wired wound type resistors have approx. 32 °K/W thermal resistance at 60% load (see detailed thermal design calculation in the video above), which may be used to recalculate target temperature at lower or higher power levels. Note that this value is only valid at that particular temperature, because power load vs temperature curve is not linear, as you can see from the example chart. 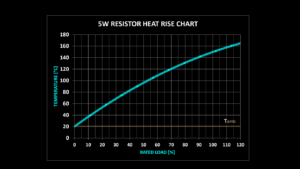 Alternatively, you can use above chart to approximately determine target temperature at rated load, but factors like ambient temperature, leads length, close placement near the PCB board surface, horizontal or vertical resistor mount, other nearby resistors/components and available cooling (air flow) will affect the exact value by few degrees.

One youtuber asked me in comments under video above: he wants to use resistors to heat a small aluminum container filled with anti-mosquito oil. What voltage and resistor values should be used in this case?

It should work without any problems but in reality using ordinary ceramic resistors designed for 150 °C max is not a good idea. Why? Because, evaporation points of common oils is usually much higher than that depending on the oil kind (e.g. between 175 °C and 235 °C). Lemon eucalyptus and other essential oils evaporate more easily at lower temperatures (e.g. between 5 °C and 100 °C) depending of the kind and composition. I couldn’t find exact evaporation temperature of anti-mosquito oil, probably because there are different kinds, and thus it has to be determined empirically throughout an experiment.

First, you must be certain to use ceramic resistors designed for 300-400 °C (or higher) maximum operating temperature, otherwise they’ll burn and quite possibly catch on fire! (you don’t want a smoking resistor after all) It is also possible to use a custom made DIY resistor of Nickel-Plated Copper or Nickel-Coated Copper wire and wind it around the aluminum can to heat it directly instead through ceramic resistors.

Second, you should make sure to have a good contact between resistor’s body surface and metal can surface for an efficient heat transfer. You may also consider applying a thin layer of thermal compound (paste). There are adhesive thermal compounds and tapes available too, but they could be problematic at such a high temperatures as adhesive layer might become loose.

Now third — the most important part: what resistance should be used? If you use 5 Volts, it may require too much Amperes (“amps”) to drive the resistor to such a high temperature (e.g. 200 °C).

Look at the chart below for common 5 Watts cement resistors (no, we cannot use those because they will get brown and eventually burn! — it’s just a thought experiment!): suppose that we extend the temperature-power curve beyond 120% – we would have to drive our resistor at around 180 % of the rated power to reach the temperature of 200 °C – almost double the factory design specs! At that power — (180 / 100) x 5 = 9 Watts our resistor should reach 190-200 °C working temperature that should be enough to start evaporating oil. If we still use a common USB connector at 5 Volts, we can easily calculate the required resistance: Resistance = Voltage² / Power = (5 x 5) / 9 = 2.77 Ohms (or 2.7 Ohms common E series standard). The current required by the USB port alone to provide should be: Current = Power / Voltage = 9 Watts / 5 Volts = 1.8 Amps. Ok, this is too much for ordinary 500 mA (0.5 Amperes) USB ports, but easily achieved by high power chargers.

The design challenges are up to you to solve! :)