Introductory guide to SMD LED Chips can be found here.

We have tested 5 different models of pocket-sized USB LED night lamps and compared them to a common candle stick. Each USB lamp is fairly bright, although you will need at least 4 or 5 of them strategically positioned in order to replace a single 60-75 Watts incandescent or 8-10 Watts LED lightbulb. Each stick consumes around 1.75 Watts of energy and it is powered directly from a 5 Volts USB port. 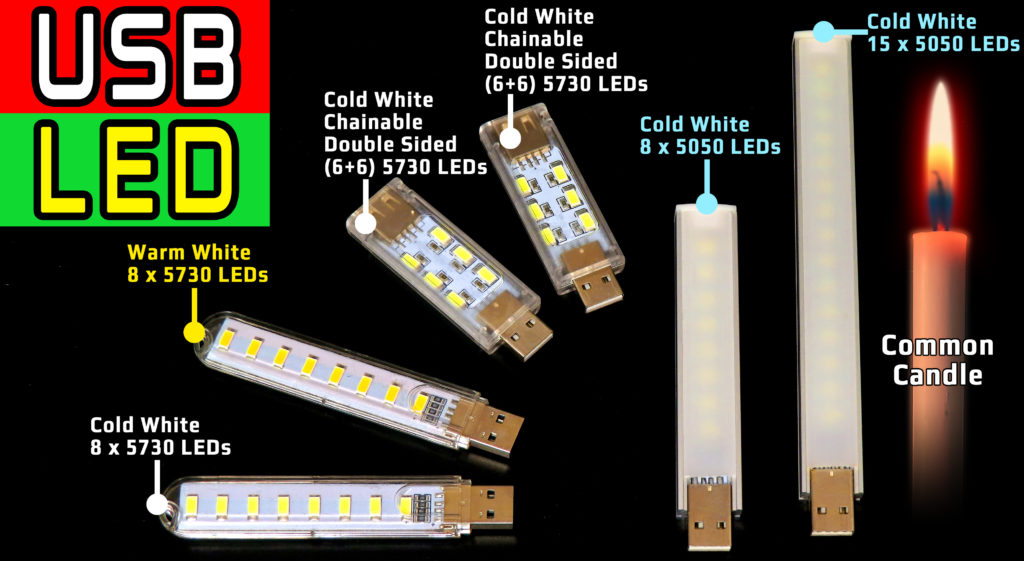 USB LED lamps tested here are very lightweight, extremely portable, and cheap – each one costing around $1 USD dollar, or so. They are very handy, we use them with portable external power bank on a regular basis for various tasks, and they can also help a fellow photographer to achieve a more natural look of their subjects, or to avoid the built-in flash (or even combine flash with additional lighting source for maximum effect!). Particularly suitable models for additional lighting in photography are aluminum models with plastic diffuser on top, so that subject appears evenly illuminated.

Advantages over the traditional common candle are numerous. So much, in fact, that we were absolutely astonished how inefficient and dim candle light appeared in contrast to modern LEDs! Ah, those were the days… when humans at night lived in darkness filled with little glimpses of light here and there. Although, at least, they had stars on the sky.

In any case, watch our videos to discover how portable pocket-size USB LED lamps performs, including basic calculations about LUMENS and CANDELA equivalents covered near the end. In addition, we also tested their power consumption performance, which is important when running on batteries / power banks, and their thermal performance e.g. how much those USB sticks become hot after prolonged use.

In SMD5050 8x/15x LED models four SMD resistors “1R3” (1.3 Ohms) are connected in series with each other (forming a 5.2 Ohms equivalent resistor in groups of two) and again in series with all the rest of the diodes which are again connected in parallel with each other. Voltage drop is ~ 0.505 V across each 1R3 resistor that limits and determines the total current flow. As we said, this is a simplified schematic diagram, in reality circuit looks like 2.6 Ohms resistor serially connected to parallel diodes, and finally serially connected to last two 2.6 ohms resistors. LEDs are actually floating in the middle voltage between 1 and 3.8 volts, and the only reason this was done this way is probably to prevent any potential short circuit because of the conducting aluminum profile and substrate.

In SMD5730 8x LED models four SMD resistors “200” (20 Ohms) are connected in parallel with each other (forming a 5.0 Ohms equivalent) and again in series with diodes connected in parallel. Voltage drop is ~ 2.0 V across all four 20R resistors (this is idealized, see above table for real current measurements – resistance of board traces and USB connector introduce additional resistance lowering total current / power draw!).

In (6+6) 12x SMD5730 model each LED has its own dedicated resistor marked “680” (68 ohms). Voltage drop is also ~ 2.0 V on average across each resistor but it was not directly measured in this case (it was easy to calculate it thanks to obvious parallel circuit topology).

NOTE: following current consumption measurements were re-done using accurate digital multimeter
NOTE: following efficiency measurements were completed using accurate phone’s ambient light sensor (LUX meter) and they represent peak (maximum) measured values at specific points at 0 degrees angle with respect to the lamp’s plane (see video review part 2 for more details). Do not confuse this measurement with total lumens output lamp or LED chip specification and Lumens per Watt (lm/W) efficiency (although, they are certainly related), because LUX is limited only to an illuminated surface area of light sensor itself, while lumens measure total light output in an enclosed sphere around the light source! Measuring lumens in home / hobby environment without integrating sphere and lots of photo sensors is extremely difficult! All you can do is to sample several points around the imaginary sphere and approximately calculate total lumens output later with limited accuracy (related to number of sample points measured). Since we do not know exact sensor model used in our smartphone and sensor’s surface area, it is impossible to determine lumens output in each point. Therefore, we stick to the LUX measurement method only.

LUX meter was provided by Huawei P40 Lite E smartphone, which is equipped with a very sensitive, responsive and precise ambient light sensor that outputs digitized data directly in LX units in the range from 0 to 100000. Sensor is only recognized as “B” (it could be BH1750FVI or equivalent). Modern ambient light sensors built into current smart devices are extremely cheap, affordable, mass-produced, (most importantly) have a nearly ideal approximation of the human eye spectral response (sensitivity to different colors / wavelengths) and are highly accurate for this kind of measurements, provided that the incident light is positioned at 0 angle to the sensor. Intensity was measured from a distance of 30 cm / ~ 12 inches / ~ 1 foot away.

An interesting thing that we learned from this little experiment was how much the presence of a light diffuser plastic cover on SMD5050 8x and 15x models lowers the light illumination intensity? We were shocked that reduction was as high as ~ 33% !!! Well, the light certainly appears softer and more pleasant than the bare LEDs, but we have to wonder if there’s anything that can be done to reduce that huge loss?

By the way, there is a very tiny nylon layer on the diffuser probably acting as a scratch protection during transport that you should peel off (you can see it partially removed on a USB LED LAMP 8×5050 CLOSE-UP photo below — it is barely noticeable though).

In addition, 8x 5050 model appears roughly 10% brighter than its 15x 5050 bigger brother counterpart! No, it was not because of the USB voltage drop in our power bank, input USB voltage was between 4.95 ~ 5.00 V rock. It has to be explained by the diode batch difference, because both lamps use exactly the same circuit topology and current limiting resistors. Larger amount of current per each LED when we do the math clearly explains it.

Also, notice that in chainable (6+6) 12x SMD5730 model using 2 modules connected in series does not exactly produce twice the amount of power consumption, but slightly less. Why? The reason for this is voltage drop / electrical power loss phenomena (commonly occurring in cheap and very long LED flex tapes / strips): first LED in the chain receives highest voltage which progressively becomes lower along the strip line, and last diode will receive the lowest voltage in the chain. The exact voltage drop percentage depends on conductors’ electrical resistance and current draw. Of course, the line in this lamp is not very long, but you also have to account contact loss in USB connectors! On the other hand, dual lamps produced more than twice the light, so how is this possible? Well, if you watched the video review part 2 you could see that because this lamp is shorter, we probably did not ideally aligned it with the lux meter sensor, and that can explain the lower results (readings). Another explanation is that 12x LEDs probably generated more reflected light in the room that reached our sensor’s surface (ideally, we should use walls painted in black or dark box for illumination measurements).

But, most astonishing and shocking result was that the Warm White SMD5730 LEDs were the most efficient in our test. We checked with different phones and their light sensors, and while the units were within +/- 10% tolerance, the conclusion in all cases was unambiguous!

Why Warm White LEDs appear brighter / more efficient according to LUX meter? Cool White LEDs have the prominent peak in the 450 nm region of the visible light spectrum, while Warm White LEDs have the same peak in the 570-630 nm range. LUX meter sensors closely mimic human eye response and have the peak sensitivity response around the 550 nm, which is very close to the yellow-red light from WW LEDs. Given that fact, it is no wonder that we’ve got this result. However, that doesn’t mean CW LEDs are bad, in fact, they might appear brighter either because of the psychological effect or personal preference.

How long can a USB LED lamp work with a common power bank?

NOTE: The values in this table are considerably different from the table presented at the end of the video review part 1 because they are now re-calculated using more accurate current draw data later obtained with precise digital multimeter. In addition, power conversion factor and loss in power banks is also taken into account to get more realistic / accurate results. Common USB Power Banks use lithium-based batteries with 3.7 volts nominal voltage, while USB specification requires voltage boost conversion to 5.0 volts which reduces “effective” mAh rating of the battery because of the increased current draw at the battery / voltage converter input side (energy conservation law in physics). Thus, actual Power Bank output capacity (with converted battery voltage from 3.7 to 5.0 volts) is calculated as follows: 3.7/5.0 * 0.87, where 0.87 is an arbitrary boost conversion efficiency factor (usually between 0.80 and 0.95 depending on power draw of the attached load and converter’s efficiency). Average USB LED lamp consumption is assumed to be 330 mA. All results are rounded to “human-friendly” numbers for practical purposes, they are not exact decimal values!