⚠️ Do not be tempted to look directly into high-brightness LEDs with naked eyes!

SMD LED chips have greatly evolved over the past couple of decades. With the cost per lumen exponentially decreasing now they come in all different shapes and sizes you can possibly imagine. 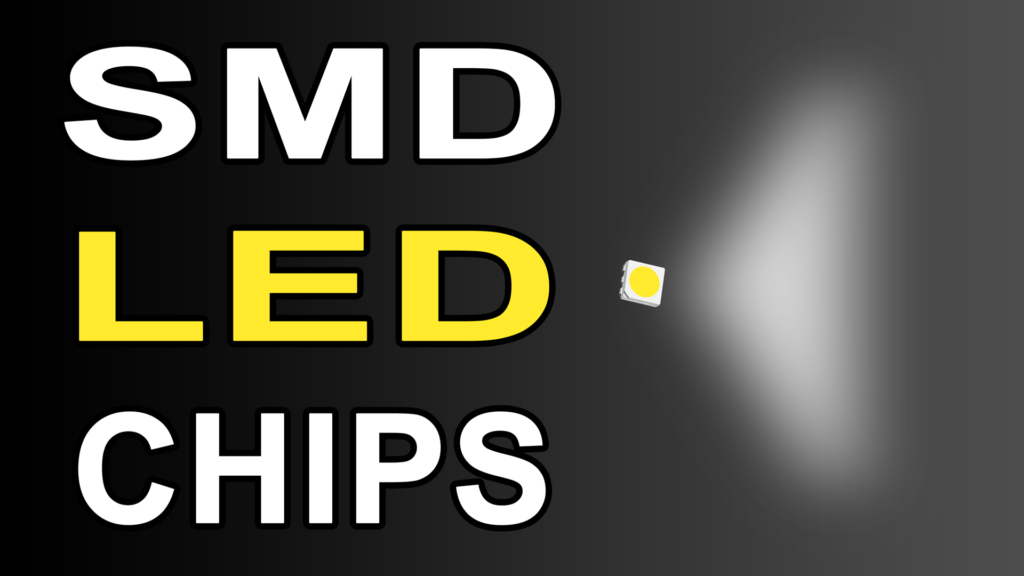 Why 555 nanometers you may ask? Because, standardized V(λ) curve that describes average human eye sensitivity to visible light peaks exactly at that number! We have to thank our surroundings in nature for that, obviously! In another words, an ideal LED light source would emit “pure green” and convert 100% of consumed electrical energy into light, achieving above maximum theoretical efficiency limit.

But, what about other colors? What about red, blue, yellow, orange and white? Well, whenever we shift, spread or stretch spectrum of emitted light to include other colors in the output, we reduce maximum theoretical efficiency. Why? Because our eyes are not that sensitive to other colors, particularly to the extreme blue (< 450 nm) and extreme red (> 700 nm) ends of the scale, and we are completely blind to ultra-violet and infra-red (IR) spectrum and beyond.

White light LEDs have a maximum theoretical efficacy around ~ 350 lm/W, which means that we are not there yet, but we are getting really close! Cree (who sold its LED business to SMART Global Holdings, Inc. in 2020) was the first company to breach 300 lm/W efficacy barrier, according to company’s official press release (2014). So, why aren’t we seeing them in our tables listed below and online stores ready for purchase? Because those are R&D laboratory specimens test results, they are either extremely rare and expensive to produce (requiring high precision and expensive and tight material and mechanical tolerances for mass production at our current technological levels), and availability is thus very limited. They are both exclusive and expensive for the time being.

How are White LEDs made?

There are 3 methods currently available, each having certain advantage over the other:

💡 Note that some SMD LED chips (e.g. 5050) are actually consisted of several individual LEDs inside! If you take a closer look, you will notice 6 or 7 separate areas under the LED’s lens cover. Needless to say, this fact contributes to their higher electrical power and light output rating, but some loss is introduced because of space boundaries between separate substrate “islands” along the limiting thermal characteristic from multiple diodes sharing the same package.

In case of multi-color RGB LEDs, each LED segment inside the chip is of Red, Green, and Blue color, respectively. Sometimes, additional 4th warm white (WW) or cold white (CW) dedicated LED may be present inside the same chip to reduce discrete color mixing artefacts, improve realism and CRI (Color Rendering Index) — in such cases chips and strips (and corresponding controllers) are usually designated as RGBW to distinguish them from discrete or more common R–G–B types. By varying (mixing) R-G-B channels individual brightness, an illusion of “infinite” color palette is achieved.

Data is generalized and greatly simplified to get an idea, but in reality things depend on production batch, post-production classification (grades / bins) and other characteristics specific to each manufacturer.

First 2 digits denote width; second 2 digits denote length (all units are in 1/10th of a millimeter or mm, for short). Unfortunately, size designation alone does not tell us absolutely anything about their electrical and light emitting characteristics!

💡 Disclaimer: Following is only a general classification of the currently most popular sizes which should not be taken as absolute. Refer to the table at the bottom for more comprehensive list. Beware of the fact that some single-diode chips per package may be more powerful (posses greater power handling) in comparison to other types or combo ones, but that does not automatically translate into higher efficiency! Manufacturers classify different grades / bins of LEDs during mass production process and price them accordingly. In another words, you may find generally superior type of chip “on paper” from a less known (or unknown) manufacturer to perform far worse than a less advanced model from a respectable one! Also, you have to consider variations in quality and performance between production batches, as well, which tend to be very high from less known and respectable producers. World of LEDs is covered in all shades of grey (there’s got to be a joke in there).

Cree produces some “exotic” 5050 types (5 Watts, operating from 6 V to 36 V, emitting up to 455 Lumens per single chip and achieving up to 201 lm/W efficacy), but they are definitely not a common kind you’ll usually find around.

Also, there is Cree XLamp XHP50 (Extreme High Power) series (and newer more efficient and improved next generation XHP50.2) which are also SMD-like mounted chips with 5.0 x 5.0 mm square size, but have much larger front lens and up to 18 Watts maximum power rating!

XHP XLamp XHP35/XHP35.2/XHP50/XHP50.2/XHP70/XHP70.2 aren’t in the same class as conventional SMD LEDs we are covering in this article, they are considerably more powerful (although, not necessarily more efficient!) and come with a characteristic star-shaped aluminum heatsink.

As a general rule, the more powerful chip is (e.g. it handles higher input voltage and current), the more light it produces (in total), but the less efficient it is. In another words, driving high-power chips at 40-50 % of their nominal power rating will usually produce peak efficacy [lm/W] or LPW rating, while driving them further towards their nominal (maximum continuous) rated specs will lower that ratio. Most efficient chips are usually lower 0.2 W types, because they operate at lower temperature, they are easier to produce and get “perfect bins” during production.

Once again, keep in mind that data varies by manufacturer, class (price), application, and also changes with each new generation of LEDs; consequence of a rapidly developing industry. Cheaper (low power) ones usually find their usage in products such as USB LED lamps or LED strips. More expensive ones are reserved for a higher class of products, with their respective price. But, higher power and light output (lumens) translates into more battery power required to drive them (and, consequently, generated heat), which is something of a luxury and design constraint in miniature portable devices and applications.

We need to mention cheap LED “clones” designed to “look” and “feel” like the real ones. They are common in budget / low-end LED strips, lamps, lightbulbs etc. What makes them so inferior and weak? Essentially, they use thinner and smaller silicone substrates, wires, less copper (in strips / tapes), smaller heat-sinks, bad power regulators and so on. If you measure their weight, you will find that they are often 2 to 3 times lighter than their “original” counterparts. All that makes them prone to greater heating, ultimately limiting their absolute maximum power ratings and lifespan.

LED chips also come in different power and operating voltage ratings, too. Although, this is mainly achieved by additional controller and resistor network circuits, or stacking chips in series, resulting in operation at higher rated voltage than nominal LED silicon excitation values.

Common modern SMD LED of white or blue color operates under 2.7 ~ 3.6 Volts (matches modern Lithium-based or 2 (or 3) x AA/AAA standard batteries), but there are also other variants: for 5 Volts (USB bus powered), 12-24 Volts (car/truck accumulator powered and in common household lighting applications), and all the way up to mains 110-220 V AC grid power supply (home-office-industry use). Voltage boosters or step-down converters are used to either boost lower voltage (1-3 volts) into higher one (5-12 Volts), or rectify and scale down mains power supply.

Some LEDs can be driven with higher voltage (e.g. 3.7 ~ 4.5 V for white LEDs), but that greatly shortens their lifespan, and even prematurely burns them! There are also special high-voltage types (6-18 V or more) with high efficacy.

LED chips are non-linear electronic components (V-I curve), very much like their ordinary non-light-emitting relatives, which means that their light output performance greatly varies with the variation of input voltage. This makes very little concern in applications such as portable battery-powered LED lamps, but in professional and home lighting applications, it is of a great importance. In constant voltage (CV) mode, current limiting resistors are used, most notably with LED strips, USB LED lamps, “corn” bulbs, ceiling lamps and so on, however, resistors lower the overall efficiency because excessive power from the power supply or battery is wasted into heat. This is why constant-current driver circuits (CC) should be used, since LED brightness can be controlled more linearly by the amount of electrical current passing through the chip in active manner without excessive power waste.

[1] Flux and Luminous Efficacy is stated for polychromatic visible light spectrum (e.g. warm, natural or cold white). It is considerably lower in monochromatic types, except for green laser at 555 nm, of course. Also, see [2] and [4] below.

Efficacy is often stated at junction (chip) temperature at 25° degrees C, which is unrealistic without a large heatsink and/or active cooling. Efficacy at more common 85° degrees C is approximately 8-10% lower. This makes direct efficacy comparison between different LED types, classes (bins) and manufacturers even more challenging.

Flux per chip is provided for orientation purposes at maximum continuous rated power and ideal room junction temperature. Of course, at lower current / voltage levels or higher operating temperatures it will be lower, per design and project goals / requirements.

[2] Heatsink is recommended for prolonged or continuous operation at high or near maximum rated power. In low-power types (0.2 ~ 0.5 W) heatsink can be omitted at lower power levels (< 0.1 W), but chip lifespan will be greatly reduced when run at higher power output without proper cooling from our experience (this is particularly true for cheap LEDs despite datasheets claiming otherwise). Higher operating junction temperatures negatively impact luminous output and efficacy (as much as 20-30% reduction in light output intensity is observed), while sub-zero temperatures (in Celsius) can increase light intensity by the same amount! In addition, running LEDs at high brightness and temperatures increases material wear and dimming phenomena over time (you probably heard of screen burn-in on mobile phone and TV displays -- which also affects related entirely different TFT LCD technology, as well!). For this reason, we suggest a mandatory heatsink surface when running at high or maximum rated power levels. COBs and portable lamps use aluminum substrate as part of integrated heat sink PCB design.

[3] With Flux and Beam Angle given it is easy to calculate equivalent Candela (Cd) output using standard formula:

where Iv is luminous (light) intensity in candela, Φv is luminous flux in lumens, and θ beam angle in degrees.

Further, if we replace θ = 120° degrees (typical) in above equation and simplify it, Lumen-Candela equation becomes:

In another words, luminous intensity expressed in candela is roughly equal to 1/3 for a given luminous flux with LED beam angle equal to 120° degrees.

[4] High CRI (color rendering index) [Ra] chips typically have lower efficacy (lm/W) and brightness. Specialized chips may have CRI Ra value up to 98 according to some manufactures. High CRI lighting is suitable for professional photography and videography (think Hollywood), but also for well designed homes, public and office spaces, albeit at reduced efficacy.

[5] Chip package only. Does not include soldering pins on chip’s sides.

COB (chip-on-board) LED Light is the latest and greatest trend among LED lighting world, breaking away from traditional discrete packaging and densely packing as much integrated chips as possible on an arbitrary shaped area made of insulation layer and aluminum substrate (heatsink): circle, square, rectangle, moon-shape, star-shape… Phosphorus layer is spread over entire COB shape, contributing to their unique appearance. Note that basic aluminum substrate provides bare-bone short term COB cooling, and much larger heatsink must be added separately if run at maximum power.