TIP:  you can use the same procedure to repair stuck or broken in/out/aux connector inside any audio-capable device, such as mobile (cell) phones, tablets, keyboards, audio recorders, laptops or desktop computers!

HOW TO REMOVE 3.5 mm AUDIO JACK (PLUG) TIP THAT GOT BROKEN AND STUCK

Yesterday my 3.5 millimeter audio jack connector cable (also known as 1/8″ TRS, Audio jack, phone jack, phono jack, phones connector) got broken and the tip was left stuck inside the analog LINE-IN input of my Conrad McCrypt DR3 Portable Recorder. There was no way to get the tip out from the female connector side. 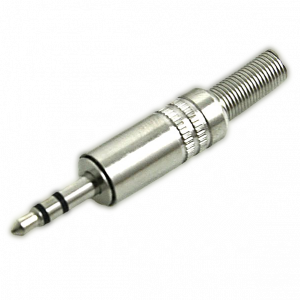 Even got an idea to open the recorder and try to push the tip out from the inner socket side, but I was out of luck. The internal chassis mount female jack socket soldered onto PCB board is enclosed in a plastic case without any openings on it. Back to square one.

Yes, of course I tried to shake it out, without any success. Also tried to create negative pressure with vacuum. No luck. Problem occurred because of 2 reasons: the Conrad DR3’s LINE-IN input socket was around 5-10 % (rough estimate) smaller then the standard, and the metal 3.5 mm TRS jack was around 5-10 % wider at the lowest junction point. With those combined, it was just a matter of time when this accident was going to happen. Oh, and I rarely used LINE-IN input in the first place, so that was another reason why the socket/jack combination was still very tight (it was like new).

I decided to disassemble the TRS audio jack connector completely into its components and use the central piece — metal rod inside it to get out the stuck tip. This central metal rod will be the key part to our extraction procedure.

I used super glue on the tip of the rod and steadily placed it inside the jack hole opening to perfectly fit into the tip’s inner hole.

You should leave the glue to dry at least 30-45 minutes and then gently try to pull the rod and the glued tip out. If the glue fails first time, repeat the procedure and try again. In my case, I have spent around 90 minutes and 3 trials in total after which I finally got the metal piece out of the jack connector hole (third time’s a charm). Just be patient and do not give up!

Final Tip: do not put excessive amount of glue, do not be tempted and resist that urge! If you spill the glue to the surroundings of the internal female socket, the only way to fix this problem will be replacing the entire internal PCB connector.